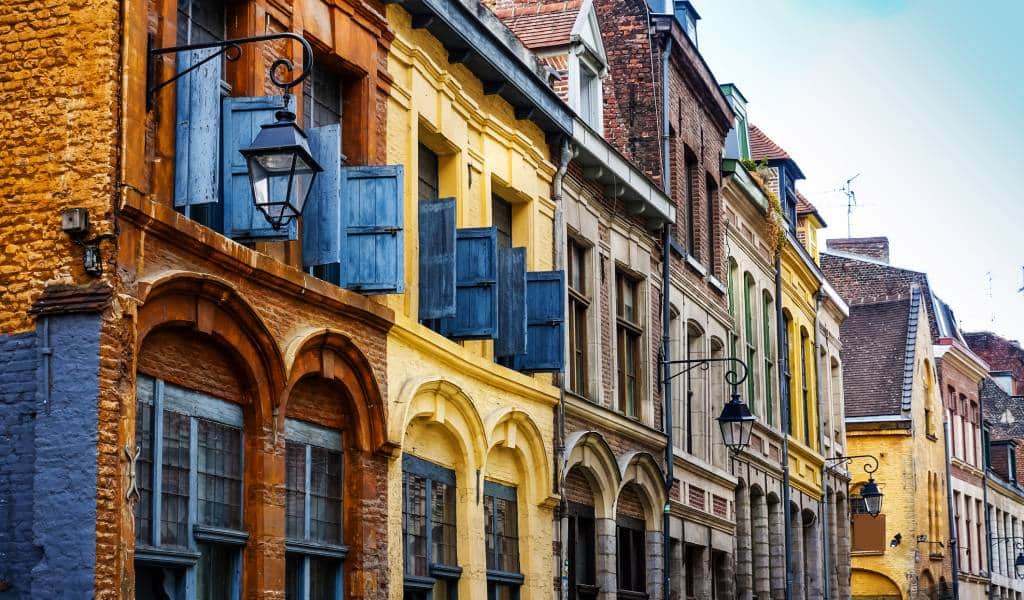 5 European Cities You Can Visit from London by Train

Fancy a European city break, but want to reduce your carbon footprint? Luckily it’s easy, fast and relatively cheap to get to major cities and lesser-known destinations across Europe by rail, departing from London.

All the cities listed here can be reached within five hours’ travel time of central London, and just one train journey each way. Plus, you’ll leave and arrive in the city centre—there are no airport transfers adding to your travel time.

Cheapo pro tip: Save money and visit all five cities (or more) using an Interrail Pass, plus there’s an extra discount if you’re under 27 or over 60.

Bonus tip: As with train travel within the UK, remember to book in advance (around six weeks) to get the best deals. Happy travels!

Eurostar has been a game-changer for weekend breaks from London. Hopping on a train from St Pancras can take you directly to Paris, Lille Brussels, Bruges, Rotterdam and Amsterdam. But let’s go to Paris first.

Paris is the perfect size for a weekend away. Jump on a train on Thursday or Friday, and head back on Sunday afternoon. Even two days in Paris should give you enough time to do a mix of touristy things (we recommend a night-time trip up the Eiffel Tower, if you go), and city wandering. Fun fact: Paris is the most visited city in the world, with an average of 27 million visitors a year.

The high season in Paris is June to mid-September, and then again in mid- to late December. Autumn and spring are generally cheaper and less crowded, and the weather should still be decent enough for exploring neighbourhoods like Montmartre (18th arrondissement) with beautiful views from the Sacré-Coeur and dreamy, winding streets. If the weather is good, take a stroll around the Canal Saint-Martin neighborhood (10th arrondissement) for refreshments at its many hip bars and cafés, like Le Comptoir General—so cool it’s hidden down an alley.

Note: If you’re going to tourist spots, it’s worth booking things like the Louvre in advance, as it will save a lot of queuing time.

Like London, accommodation in Paris can be pricey. But there are lots of budget hotels and Airbnb rooms—plus look out for hotel + train deals from Eurostar, which might save you a few Euros.

If you want some city escapism without the crowds (and not-so-cheap) prices of Paris, then Lille is also a good spot for a mini-break by train. And at 1 hour, 22 minutes travel from St Pancras, it’s even closer than Paris.

Lille is a medieval city close to the border with Belgium. It’s much smaller than Paris, perfect if you want a French city break at a slower pace.

Getting there involves a pleasant train ride through the French countryside. You’ll arrive at Lille Europe Station, which is just 10 minutes’ walk from the city centre. Once you’ve dropped off your stuff, getting around is easy. A 24-hour public transport pass costs about €5, which you can use to hop on the metro (two lines), tram or bus. Or you can rent a bike from V’Lille.

But, it’s actually a pretty walkable city—many of its main landmarks and attractions are close to each other. It’s also a very picturesque place, with beautiful architecture. Wander around The Grand Place, a large square lined with 17th and 20th-century architecture.

Your Eurostar ticket gets you 2-for-1 entry into some of Lille’s top museums and galleries too—like Palais des Beaux-Arts, one of the largest museums in France.

Obviously, eating and drinking is one of the most important parts of any trip—and Lille has plenty to feast on. You can eat well on a budget too. Head to the backstreet of Rue des Bouchers, which is filled with small bistros like Ripaille, where you can get two-courses from €19. For food on the go, grab edible treats at the covered food hall in the market of Wazemmes.

Accommodation-wise, you’re looking at a mix of budget hotels like Ibis and Best Western, hostels, and Airbnb from around £25 per night.

Hop on the Eurostar and head to Belgium’s capital for culture, politics, art and of course … waffles.

It’s a pretty city for wandering, with lots of Art Nouveau—Brussels was home to architect Victor Horta, one of the movement’s founders. His four townhouses, Atelier Horta, Hôtel Tassel, Hôtel Solvay and Hôtel van Eetveld, are all Unesco World Heritage Sites.

The city dates back to 949 AD, so visit medieval landmarks like the Grand Place and the ruins of Coudenberg Palace, and then bring things up to date with a visit to the European Parliament.

Unlike other capital cities (looking at you, London and Tokyo) you can visit plenty of art galleries and museums without the time-sapping queues, including the Magritte Museum, and the Royal Museums of Fine Arts where you see work by famous Flemish artists like Reubens and Marcel Broodthaers. There’s plenty of colourful street art to check out too, including bright Tintin murals.

Brussels is also filled with beautiful, landscaped parks like Jardin du Petit Sablon. For classic Belgian food and drink, sample the waffles at Mokafe (close to the Grand Place), Moules-Frites at Chez Leon, or the many offerings on foodie street Rue de Flandre. Belgian beer flows wherever you go—including the old-school A La Mort Subite, Bier Circus, and puppet-filled Poechenellekelder (try saying that five times in a row after a few lambics).

Accommodation-wise, there are budget hotels like Hotel Bloom, The Pantone Hotel Brussels, and the Monty Small Design Hotel, or self-catering apartments with RentByNight and Airbnb, as well hostels.

Anyone who’s seen the film In Bruges knows it’s a very photogenic city. Even though a lot of grim stuff kicks off in the film, it does a better job of showing off the place than most tourist boards. In fact, Bruges is so popular with people flocking to see its Gothic buildings, canals and medieval streets, that the tourist board has stopped adverts for day trips there to avoid overtourism!

We recommend going in late autumn or winter to avoid the peak season—you’ll be able to enjoy atmospheric wandering, hot chocolate, and the Christmas markets. It might be easier to climb the Belfry of Bruge in cooler weather too. That’s the medieval tower with 366 narrow steps to the top, giving you a 360-degree view of the city.

Quite a lot of top sights feature in In Bruges, and this handy map will help you wend your way around them, including the Belfry, the Basilica of the Holy Blood and The Inner Court Gruuthuse Museum.

Visiting Bruges during winter means you also hit festival season (late November to early January), which includes a lot of Belgian chocolate, and a rather cool ice sculpture festival.

You might want to rest your feet for a bit, and see Old Bruges at a leisurely pace from a canal tour, which you can pick up from one of five boat landings around the centre. After a day of sightseeing, grab drinks at Bar Des Amis, close to the Markt, or some grub at Gruuthuse Hof—one of the city’s oldest restaurants.

Bruges is full of budget hotels like Ibis Brugge Centrum or the Braamberg B&B, which are both near the historic centre of Bruges, close to the main sights.

One of the newer cities added to the Eurostar service is Amsterdam. You can be in the canal city in roughly the same time it takes to get to Edinburgh. It’ll probably cost you less, too.

If you’re going for the weekend, it might be worth grabbing an I amsterdam City Card, which gets you access to public transport, as well as over 70 attractions and museums like Anne Frank’s House, Rembrandt House, and Muiderslot Castle. It’s €85 for 48 hours, and you get to skip the lines.

Watch out for cyclists in Amsterdam—they’re everywhere, and they move fast! Of course, you can easily join them and rent a bike (also included with the City Card) to zip around the pretty streets of Jordaan, past colourful townhouses in De 9 Straatjes (The Nine Streets), and around the pretty flowerbed-lined Vondelpark to catch free outdoor concerts if you’re visiting between June and September.

Head to Musemplein for major museums including the Rijksmuseum and Van Gogh Museum. It’s worth seeing the city from the canal too, so factor in a short tour.

For food, head to De Culinaire Werkplaats Restaurant, which offers a mix of set menus, and occasionally a pay-what-you-want option. There are many Dutch pancakes to try too, including The Pancake Boat.

If you want to stay in the city centre, there are budget options like XO Hotels Couture and Ambassade Hotel, Airbnb and plenty of hostels.

While we do our best to ensure it’s correct, information is subject to change.

Written by: Becky Lima-Matthews
Becky's London favorites are: Kerbisher & Malt, 5 Cheap BYO Restaurants in London, Arancini Brothers
Filed under: Getting Around | Things to Do
Tags:
Sharing