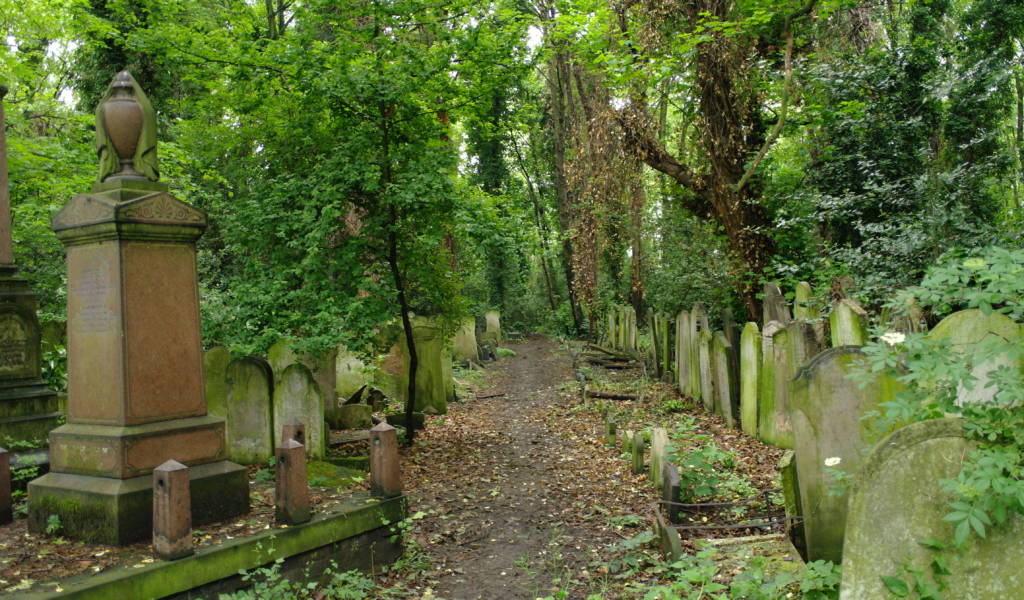 Here at London Cheapo, we love a moody walk around an old graveyard on our Exploring Hidden London adventures. Like Abney Park in Stoke Newington, Tower Hamlets Cemetery Park was one of ‘The Magnificent Seven’, but it has been a public park and nature reserve since it was closed as a burial ground in 1966. The park, surrounded by buildings and concrete, is the most urban woodland in London, and definitely feels like a tiny, gothic escape in the middle of East London. It’s just a few minutes from Mile End tube, and in the middle of a residential area you can wander around the winding, overgrown paths, hear birdsong and glimpse the cityscape through the trees.

Getting to Tower Hamlets Cemetery Park

Getting to the park is a really easy trip from central London. Mile End Station is in Zone 2 and served by three tube lines, the Hammersmith & City, District and Central lines. Once there, it’s about a five-minute walk, just hang right on the main road then right again onto Southern Grove and you’re there.

Tower Hamlets Cemetery or Bow Cemetery as it was known to locals was a burial ground for many, including the local working class whose families couldn’t afford to buy a plot. Other notable burials include 279 Commonwealth service personnel who served in both World Wars, trade unionist Will Crooks, and Clara Grant, OBE, an educator and social reformer. When the cemetery closed in the 1960s, the Greater London Council (GLC) wanted to clear most of the graves to build a new park, but protests from understandably irked locals led to the preservation of most of the original site.

Things to see and do

It’s a pretty atmospheric place to just go for a stroll, with wildflower-covered meadows, a chalk maze and of course, lots of tombstones and monuments to see. But if you want to delve a little deeper, there are plenty of self-guided audio walks too. So you can explore winding paths, uncovering the secrets hiding among old gravestones as you go: from local nature and architecture to spooky stories in hidden nooks with colourful benches, sculptures and wayfinding posts along the way.

The park is managed and cared for by The Friends of Tower Hamlets Cemetery Park, with the support of over 3000 volunteers. The Friends run over 170 events a year, including educational events, arts festivals, and craft workshops.

Tower Hamlets Cemetery Park is open from dawn till dusk, but mid-afternoon on an Autumn or Winter’s day with the low sun slicing through the trees and birds chirping overhead is pretty special, or pop back in Spring to see the flowers in bloom.