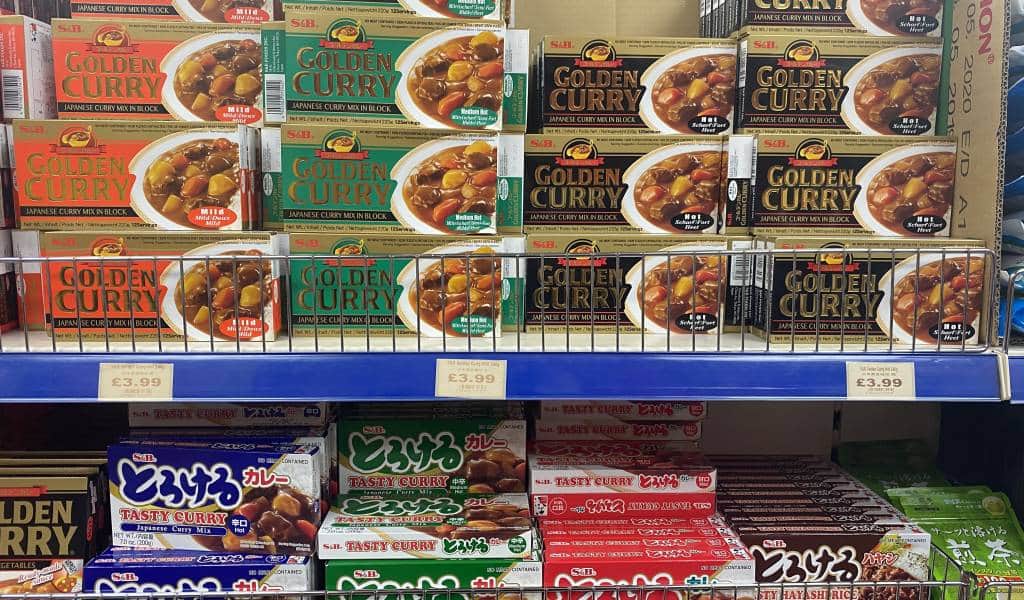 Where to Find Affordable Japanese Groceries in London

Buying authentic Japanese food that isn’t sushi can be a struggle, even here in London. Finding some ingredients at all can feel like a non-starter. And even when you can find them, you might be left paying outrageous prices for your favourite treats. Fortunately, there are a few specialist supermarkets, with a wide range of Japanese staples at relatively affordable prices. Here’s our guide to the best (and cheapest) places to buy Japanese groceries in London.

There’s a lot of choice in central London, though – no surprises – it’s not the cheapest spot to pick up your mirin and dashi.

If you’re looking for Japanese supplies in Central London, this Soho hidden gem should probably be your first stop. The small shop is absolutely packed with essentials. Prices are fairly reasonable, and there’s the added advantage of having everything in one place (with backup shops close at hand). Here’s a just quick list of things you’ll find there:

Keen on Japanese treats? Look into a subscription snack box—shipped straight out of Japan.

Unsurprisingly it’s a good spot to buy sake too. The store specialises in nihonshu (Japanese rice wine). But there’s also shochu on offer.

Just off Leicester Square, Japan Centre is certainly London’s fanciest Japanese supermarket. They stock a good range of high-end groceries. It’s great for that last ingredient in a pinch, but it does tend to be on the pricier end. You’ve been warned!

There’s a staffed fish counter with a small range of sushi-grade fish too—enough to put together a decent spread if you’re looking to impress your friends. The bustling canteen area can also be a good spot to sit down and enjoy freshly made food. All at a fraction of the price of a more traditional Japanese restaurant.

Japanese Groceries in Zone 2 And Beyond

Atariya in West Acton appears to have slipped through some kind of portal out of Tokyo and into London. We have to assume that in its place there’s now a very confused fish and chip shop operating somewhere in the suburbs of Tokyo.

There are actually several Atariya food stores—West Acton, Kingston, Finchley and Golders Green. Each is roughly similar, with a handy selection of Japanese staples and hard-to-find veggies. They’re comfortably among the best places to buy Japanese groceries in London.

The real draw is the fish counter. Staffed by legit experts, they can hook you up with more or less any fish you need for your Japanese meal. From melt-in-your-mouth sushi-grade fish for sashimi to squid, urchins, roe and flavourful chirimen jako (dried baby sardines).

Apparently, they supply some of the city’s best known sushi spots, so you’re in good hands. If you want to skip the making stage, you can order prepared sushi to eat-in or take-away at very reasonable prices. We’ve also seen premium beef for sukiyaki on offer. Something to consider if you’re looking to push the boat out!

Looking for Japanese lessons?JapanesePod101.com is a great place to start. We’ve used it and found it to be really helpful.

Billed as Europe’s biggest Japanese food hall, Ichiba is one sleek operation, with a dining area and a fairly large selection of groceries. It’s operated by the same folks behind Japan Centre. So unsurprisingly, the decent range of goods and classy store design come at a steep mark-up. That said, it’s a great spot to swing by for a treat after an outing to the shopping Mecca that is Westfield – the big food hall is at Sheperd’s Bush Westfield, but there’s also a smaller branch at the Stratford Westfield.

For lunch, the dining area is actually pretty reasonably priced, and offers some options you don’t often see in the UK (anyone for takoyaki?). It’s a canteen-style affair, with counter service and a surprisingly broad array of options. In our experience, the soba, okonomiyaki and yakisoba are better than the ramen, which can’t stand up to many of London’s increasingly good ramen venues.

If you’re lucky enough to live near a Loon Fung branch in London, you’ll never want for Asian cuisine. While the focus is on Chinese produce, it’s a good spot to by Japanese groceries in London too. Loon Fung was among the most competitive stores we visited for miso, tofu and gyoza skins. The on-site butchers and fishmongers are generally geared toward meat for Chinese dishes. Luckily, some of that translates to Japanese cooking too. You’ll often see cuts of meat and offal useful for yakitori (skewered chicken) or yakiton (skewered pork).

Asian vegetables are also a steal here. If you’re after takenoko (young bamboo shoots), napa cabbage, gobou (burdock) or mushrooms like shiitake and enoki, Loon Fung is a safe bet. Need something to cook them in? The woks and bamboo steamers are practically wholesale cheap. Aside from that, the store boasts a strong snack game, with Japanese crisps and sweets galore.

Stores are in Soho, Tottenham, Stratford Alperton and Colindale.

Another Chinese supermarket, New Loon Moon is just opposite Loon Fung. That makes the two great backup options for each other if your first pick happens not to stock what you’re looking for. It’s one of our favourite shops in Chinatown, with witty staff and shelves absolutely packed with treats from China, Thailand, Singapore, Malaysia and Korea.

New Loon Moon’s Japanese options up on the first floor are slightly limited, but include basic cooking supplies and a selection of roux blocks. Some of the veggies and spices downstairs are useful in Japanese cooking too. Their instant ramen game is also strong, with several interesting brands and flavours from Japan and the rest of Asia.

This upmarket Soho spot focuses more on Korean food (perfect if you’re craving the ramdon noodles from Parasite). But there’s some space dedicated to Japanese staples too—including sauces, roux, condiments and more. There’s also some crossover when it comes to Japanese and Korean cuts of meat and fish, which are largely sold frozen here.

The newest kid on the block, HIS Japan Premium Food and Travel opened its shop on Shaftesbury Avenue in 2021. It has a light and roomy interior for such a central location, with some cute cartoons as part of the design. As it’s a branch of HIS, a Japanese travel agency, you can also book flights, hotels and the JR Rail Pass while you’re doing your grocery shopping.

If there’s a localised Japanese community anywhere in London, it’s in Acton, and TK Trading is where many community members do their grocery shopping. Located in an industrial estate, TK Trading is built for utility. It has none of the cute atmosphere of the Japan Centre and its ilk, but makes up for it in price. There are often deals on and it’s a great place to buy in bulk. TK Trading is also located close to the North Circular and there’s free parking outside, so if you drive you can stock up and not worry about injuring your back by walking home with a massive sack of rice.

natural natural have stores in Ealing and Finchley. Some of these products aren’t strictly ‘cheapo’ but there are still deals to be had. natural natural is an organic food specialist on top of being a Japanese supermarket, so if that’s your thing be sure to check it out. Their natural natural sakesakana store is a Japanese fishmonger similar to Atariya, but with an organic emphasis.

You may not know that New Malden, a suburb on the border of London and Surrey, has one of the largest and most concentrated Korean populations in Europe. As you might expect, there are a number of shops and businesses to serve the community. H Mart in New Malden is a one-stop shop for your Korean grocery needs, and a big one too, with the stock and the car parking necessary for bulk buying. H Mart is primarily a Korean supermarket, but you can find Japanese groceries too, as well as ingredients common to both cultures. If New Malden is too far out for you central Londoners, the Oseyo stores mentioned above are from the same group as H Mart.

The pandemic has made online grocery shopping more popular than ever but Covid aside, online shopping can be a great option for fulfilling your Japanese grocery needs. Many of the shops mentioned deliver online, and there are other online-only options. Oriental Mart is a good place to start, or if you want something a bit more curated Bokksu do delicious Japanese snack boxes on subscription.

Japanese Kit Kats: You can order them online from Doko Demo.