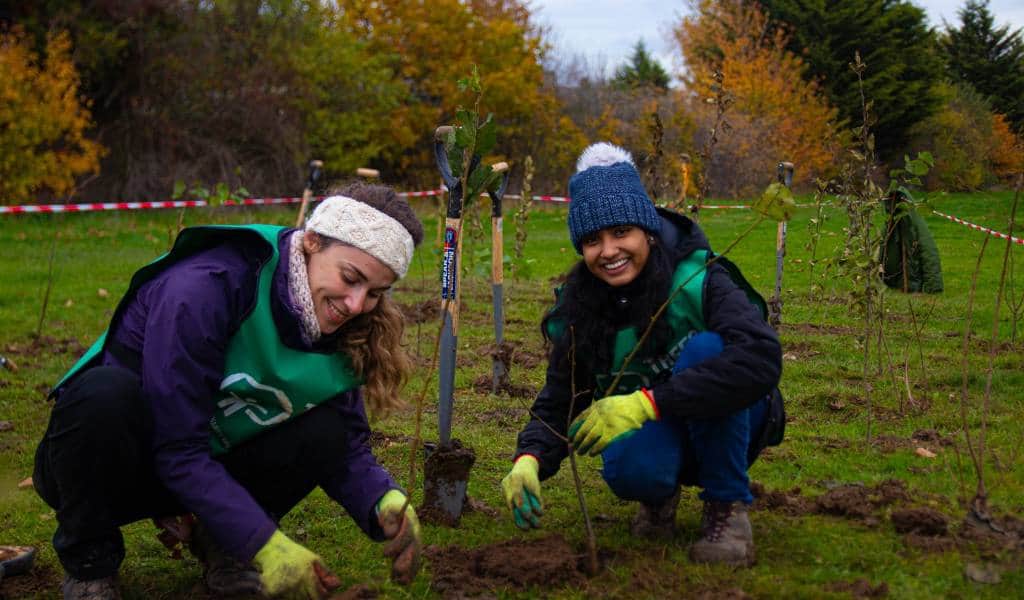 London is made up of 47% green space, and a growing number of organisations are rewilding London on both large and small scales to make it even greener. From mass-tree planting, and rewilding London’s waterways, to window boxes in homes: collective action can make the city greener, cleaner, and more healthy.

At the time of writing this, the UK (and much of the world) is on lockdown due to Covid-19. But while there won’t be opportunities to spend much time in nature for a while, conservation work done in the winter can still thrive, and seeds can still be sown at home!

Rewilding is becoming a more widely-known term in mainstream media coverage on climate change. Championed by activists like George Monbiot, it’s a process that lets nature return parts of land or water to a wild state, restoring their natural ecosystems over time.

According to the environmental charity Rewilding Britain, restoring a quarter of the UK’s land to nature can make a significant contribution to reducing emissions to net-zero carbon. That essentially means offsetting carbon emissions by removing or eliminating an equivalent amount from the atmosphere.

A lot of rewilding in its truest form (more on that, later), needs to happen in rural areas. It can take huge swathes of forest to encourage native species to return. After all, you probably wouldn’t want to reintroduce wolves and bears into the middle of London, where they once roamed free.

However, London still has a major role to play in terms of conservation. And the benefits to us include improved air quality, public health, and a boost to the nation’s ailing bee population.

One of the biggest types of conservation in London is tree planting. Trees absorb and store carbon dioxide and other harmful pollutants. And every year 2.4 million tonnes of air pollution including CO2 is absorbed by London’s trees.

But trees have other important roles to play for better urban living too. One organisation that has been covering cities with trees for about 25 years is Trees for Cities. Formerly called Trees for London, it now works across the UK and internationally.

Looking beyond the obvious benefits

According to David Elliot, the organisation’s CEO, its work has always had multiple benefits. Including mental well-being and cultural value, as well as addressing environmental challenges. Not forgetting the urban heat island effect—where urban areas are warmer due to higher population and energy use.

“Historically, our focus has been on planting and delivery projects, primarily in environmentally, and socially deprived parts of towns and cities, to regenerate spaces like parks, woodlands, and housing estates and schools etc. Having access to green space improves our physical and mental wellbeing.” He tells us.

The UK’s tree planting season is in November to March, and in September 2019, The Woodland Trust called for 1 million volunteers to plant trees across the country too. Despite the limitations of a lack of large woodlands in the city, London has a role to play in mitigating the effects of climate change, as David Elliot explains.

“Perhaps the bigger role is in the adaptation side to climate change. Trees in Cities can provide shade, and cities are getting hotter and hotter, so it’s a vital part of creating a liveable environment. They’re great at slowing down or preventing floods too as the rain comes down, it’s captured on leaves and it slows the flow of water on the streets, the root systems also help the water to through the ground. So they’re a good, natural way of dealing with flood risk, which is increasing due to climate change.”

The benefits of bringing more nature to London

In 2019, London was officially declared a National Park City by Sadiq Khan, the Mayor of London. It’s the world’s first, and is defined as a large urban area that is managed and semi-protected. The National Park City Foundation has been running for over five years, working in partnership with councils, schools, architects, developers, and businesses.

Trustee and board member, Tim Webb is a former broadcast journalist, who moved into conservation and community engagement. According to Tim, changing perceptions of city life benefits the environment and the quality of urban living on a global scale.

“London is great, and there’s lots of greenspace but it could be so much better. So we wanted to make it greener, but also change people’s perceptions of it as well. So, rather than thinking of it as a grey, urban habitat, thinking of it more as a National Park, as an environment, a natural landscape.”

Of course, climate change is a global issue. And as Tim points out, any conservation project or grassroots movement doesn’t work in silo. It has to connect with other organisations, and communities.

“We don’t see ourselves as environmentalists, as such. We’re campaigners who want to make urban living better. So we incorporate the environment, the economy, education, food, transport, all the different aspects of life that make up cities…not just in London, we’re looking to make more National Park Cities around the world, so this is something that should be taken as the standard around the world for cities.”

Part of National Park City’s remit is to make London wilder, as well as greener and healthier. And, some positive changes are already happening.

“As we do more to create green spaces, more nature does return and our rivers are getting cleaner, so we’re starting to see Kingfishers, Otters, coming closer to London. That’s because we’re helping that wildlife to return”, Tim says.

Restoring nature to urban environments is very different to rewilding the countryside, as David Elliot from Trees For Cities explains.

“People talk about ‘micro rewilding’ in an urban context. We would plant a range of species, some of which are native, but some aren’t. But with changing climates, and rain falls etc, you need a wider diversity of species than occurs. naturally in order to create healthy ecosystems and resilient urban forest..In some ways it’s neo-wilding”.

Last year also saw the first National Park City Festival—a huge outdoor event celebrating nature in London. Due to obvious Covid-19 uncertainty, the 2020 event will be a virtual one. But as Tim points out, there are lots of changes, big and small that can be made on a community, and even individual level to make London greener and more healthy.

Cities will be different after social restrictions are lifted. And perhaps that means behaviour change too. So, how can we make a difference?

“It’s really easy, you can give a plant to a neighbour, or look after a street tree pit. It’s also behaviour. The way we move around, recycle waste, use energy – active travel is an important part of living in a National Park City like walking, running, cycling. Public transport is great, but a lot of journeys we make are very short, and even walking between some stations is quicker than taking the tube…so we can think about how we move around and reduce emissions. And as Coronavirus has shown, we need more accessible green space.”

Organisations like Trees for Cities and National Park City are working hard to make clean, green space accessible to all. But there are still questions around inequality. Not everyone lives close to a sprawling heath, big park, or has their own garden.

However, rewilding and creating greener spaces can work on micro level, as well as macro level. Paved gardens. felled trees, and artificial grass on lawns means a loss of valuable habitat. As many as 40% of UK species are in decline.

But, our streets and houses can help to reverse that trend. One person who champions the benefits of smaller action, is Siân Moxon. Siân is Senior lecturer at The Cass School of Architecture, and co-founder of Rewild My Street.

The project provides guidance for people who want to adapt their homes, gardens and streets to encourage wildlife. It won a London National Park City design competition in 2016. After the competition win, Siân and her team were inspired to continue developing the idea.

Tiny gardens: getting the word out

“We decided to turn that into a useful resource based around visionary architectural drawings that would help the public be inspired and powered through guidance and tips to adapt their own homes. So it’s what I do in my research time as an academic, and it’s kind of a strategic project, so it’s about putting in guidance through the website and social media, and monthly tips to help people implement it themselves.”

Rural areas might provide better land for rewilding, but they have also been subject to intensive farming. So, urban areas can adapt and address ecological issues in different ways. Including some that start from your home. Rewild My Street has tips and resources that can encourage nature, even in the smallest, most concrete living spaces.

“Even a standard sized balcony in a typical block of flats, there’s loads you can do – I used to live in one. You can still cram in lots of planters. climbing plants, insect hotels, hanging baskets, hanging bird feeders, container ponds, nest boxes on the walls. That applies to a balcony, but also, a front garden, a little courtyard terrace.”

“Although our tips are based on your home, they can work equally well in allotments and communal gardens too. And even if you don’t have a balcony, you can put a window box in with flowering plants for pollinators like bees, or a suction cup bird feeder on your window.”

You can plant bee and butterfly friendly flowering plants, or buy small window bird feeders without having to part with much cash too, you can get a perspex bird feeder for under a tenner.

Getting involved with London rewilding and conservation projects

If you do want to get outdoors, and get your hands dirty to do some conservation, you don’t need previous experience and super strength, as David Elliot from Trees For Cities tells us.

“People of all ages, from young kids to elderly people come to our planting days, it’s great for people’s health and well-being, and you don’t have to be superman to do it! it’s accessible to all, people with disabilities, and in wheelchairs come along and plant trees – there’s no barrier, you just need a willingness to come out and do it!”

Volunteering also helps to combat loneliness, helping us to build connection as well as taking positive action. But, if you’re short on time, there are plenty of ways to help make London more green from your own postcode, even if you’re not a natural gardener.

National Park City has run large-scale, community wildflower sowing projects, engaging schools too. And all of the organisations featured in this article have created, and are developing toolkits to enable people to adapt their homes and gardens to let urban wildlife thrive. Adults and kids alike are learning to make positive changes to their environment, curbing waste, and making London a lot less concrete.