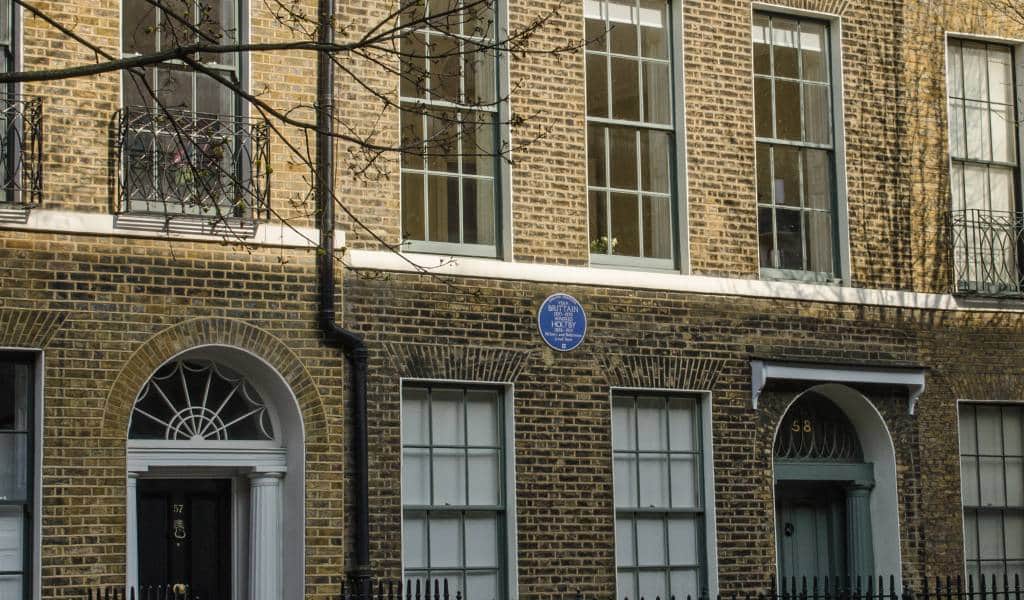 A Walking Tour of Blue Plaques in Bloomsbury

London’s famous blue plaques commemorate the homes or workplaces of notable people from throughout history in fields including education, architecture, law, science, medicine, radio and television and literature. The scheme started in 1866, and it’s believed to be the oldest of its kind in the world. There are over 950 blue plaques across London, but many are clustered together in particular areas, perfect for strolling around town. Here’s our guide to the writers, artists and scientists who are honoured by blue plaques in Bloomsbury.

How to find Blue Plaques in London

To get started, it’s worth downloading the Blue Plaques app, which is free for Android or iPhone. That’s the easiest way to find the ones that are nearby, and you can also search by London Borough or by category. Westminster is the borough with the most blue plaques, it has over 300 of them Kensington and Chelsea is second with 175, and Camden comes in third with 166.

The app also has two self-guided walks: the Soho Creatives and Visionaries tour is great if you’re short on time, and at 45 minutes, you could even squeeze it into a lunch break if you work nearby. The Literary Kensington walk will take 90 minutes, if you’re looking for a leisurely weekend walk.

Where to start the Bloomsbury Blue Plaque Walk

Bloomsbury is in the borough of Camden, the nearest tube station is Russell Square on the Piccadilly Line, but it’s a short walk or bus ride from King’s Cross, Euston, Goodge Street, Holborn or Tottenham Court Road.

Bloomsbury and nearby Fitzrovia are also home to several pretty squares, and you’ll be able to spot plenty of blue plaques by heading to Bedford Square, Tavistock Square, Gordon Square and Russell Square.

Alternatively, you can focus on a particular category:

Bloomsbury was famously the home of the The Bloomsbury Group aka The Bloomsbury Set, a group of writers, artists, philosophers and intellectuals. Members included the writers Virginia Woolf and Leonard Woolf, artist Duncan Grant, economist John Maynard Keynes and author and psychoanalyst Adrian Stephen. The building at what was No.38 Brunswick Square is now the home of the UCL School of Pharmacy. But in 1911-1912 it was a townhouse, and home to the aforementioned Bloomsbury Set members, in one of London’s cleverest house shares. The blue plaque was put up by the Marchmont Association, and isn’t an official English Heritage one, but worth a visit if you want to tip your hat to the Bloomsbury Set

Unlike many of the blue plaque addresses which are private residences or businesses, you can take a look around the Victorian novelist’s house. These days it’s the home of Charles Dickens Museum and it’s set up as it was when Dickens lived there. The writer only lived there briefly, from 1837-1839. But prolific guy that he was, Dickens spent much of that time working on his early novels, including Oliver Twist.

Virginia Woolf (née Stephen) moved about the Bloomsbury area, and she lived at this address before her marriage to fellow writer in 1912. During her five year tenancy, the writer hosted many Bloomsbury Group gatherings, so we’ll allow it even though it’s technically Fitzrovia. It was here where Woolf began work on her first novel The Voyage Out. You get a two-for-one on blue plaques at this address too, playwright George Bernad Shaw was the tenant before Virginia Woolf.

Suggested Activity
3 Months of Free Revolut Premium Banking
From streamlined money management to travel perks and investments, Revolut Banking is easy to use, and you can open your account in an instant. Free £10 credit for London Cheapo readers.
Click here for details
29 Fitzroy Square, Fitzrovia, London, W1T 5LP

Agatha Christie may be the world’s best selling novelist, but there’s another mystery writer who penned 16 crime novels including the brilliantly-titled Murder Must Advertise. Sayers lived at Great James Street from 1921-1929 and her plaque commemorates her detective stories although she also wrote plays, poems and short story collections.

Born in an era when wealthy folk could have occupations like Literary Hostess and Patron of the Arts and still be taken seriously(ish). The 20th century socialite was known for her lavish parties and thought to be the inspiration for the titular character in DH Lawrence’s Lady Chatterley’s Lover. You can’t visit the house, but you can raise a glass to patrons of the pints aka the owners of The Lady Ottoline pub nearby on Northington Street.

The celebrated 19th century scientist, best known for The Origin of Species, his groundbreaking theory of evolution lived in a house on this site. Darwin’s former home is now appropriately a UCL Biological Sciences building. He moved to Gower Street for a brief time in 1838, although it seems city life didn’t suit him too well. But if you want to see a house where he lived and worked happily for many years, you can visit Down House in Kent.

Sir Victor Horsely is believed to have been the world’s first neurosurgeon and his pioneering work also helped to eradicate rabies in Britain. Horsley lived at Gower Street when he was working as a surgeon at University College Hospital (UCH), and it was during this time when he was elected to the Royal Society of Surgeons. The building is now a Grade II listed building and is now part of a hostel for medical students. He went on to support women’s suffrage and sex education and died while volunteering for active service during WW1 in what is now Iraq.

Women generally fare better in the literary category than in the field of medicine. But Lillian Lindsay stands out as she’s also a trailblazer, she is the first woman dentist to qualify in the UK. Studying dentistry was no easy feat for a woman in the 1890s, and she actually wanted to work with deaf children, but The Royal College of Surgeons wouldn’t admit women and she was finally accepted at the Edinburgh Dental Hospital and School. The plaque in Bloomsbury was only erected in 2019 (although she was commemorated at another address in Islington which has since been demolished.

The Pre-Raphaelite Brotherhood (Founded in 1848)

Before the Bloomsbury Set took over the area, this part of town was home to the The Pre-Raphaelite Brotherhood, later known as the Pre-Raphaelites. The PRB were a collective of wealthy artists and poets founded by John Everett Millais, Dante Gabriel Rossetti and William Holman Hunt in Millais’ family home on Gower Street. They formed as a reaction against what they believed to be the artificial historical approach to painting of the The Royal Academy, and took their name from the pre Raphael Italian art of the 14th and 15th centuries.

British artist and illustrator Randolph Caldecott’s work was recognised in the US as well as here in the UK The annual Caldecott Medal was set up by the Association for Library Service to Children in recognition of the year’s most distinguished children’s picture books.
The site of Cadelcott’s old house on Great Russell Street is now home to the rather beautiful, teal-fronted Jarndyce Antiquarian Booksellers.

French born Victorian author and cartoonist George Du Maurier was known for his illustrations in the satirical Punch magazine. He also illustrated The Notting Hill Mystery, believed to be the first-ever detective novel. Du Maurier also wrote several novels including the Gothic tale Trilby and was the grandfather of novelist Daphne Du Maurier.

Other notable sights and stop offs in Bloomsbury

In keeping with the literary theme of this walk, Bloomsbury is also a great place to stop off and peruse books or have a cuppa and slice of cake.

There are also several museums and hidden gems in the area, the most famous of which is the British Museum. It’s a huge museum though, and might be worth visiting on a separate trip. But There are lots of smaller places to visit too.