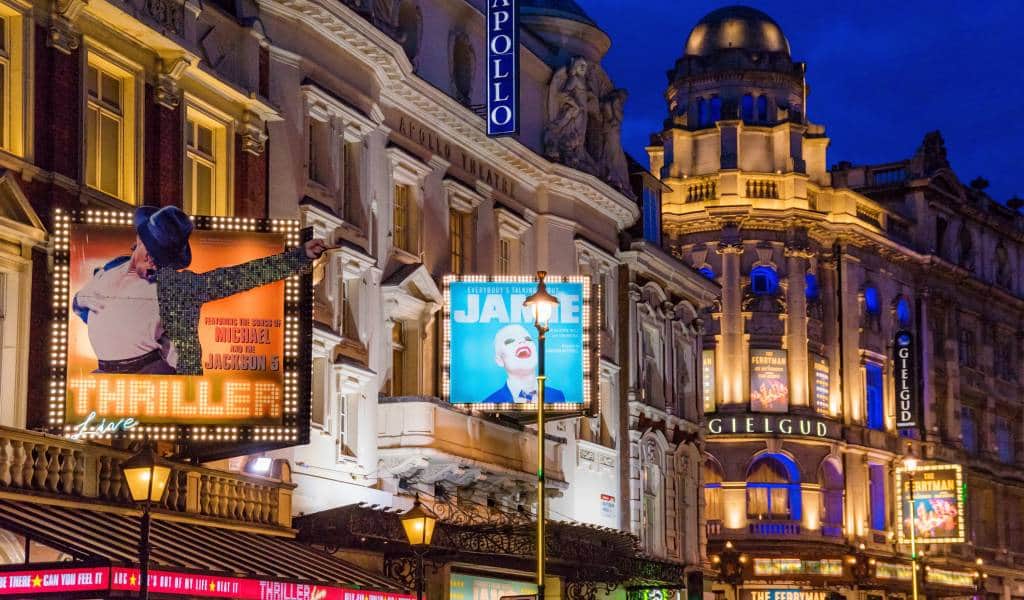 How to Get Cheap Theatre Tickets in London

From smash hit musicals to classic productions and avant-garde performances, London’s thriving theatre scene is an important part of the city’s cultural tapestry. Running the full gamut of human emotion, some shows shine a light on pressing social issues, while others offer an opportunity for unbridled escapism, climaxing in a crescendo of feel-good euphoria when the curtains come down. Each night, London’s West End provides unforgettable experiences for thousands of spectators. Follow our guide on how to get cheap theatre tickets in London to get involved.

Lots of theatres offer special deals for certain performances, such as a selection of dedicated £10.00 tickets offered in advance or cut-price day tickets released on the day of the show.

The NT releases a small amount of £10.00 ‘Friday Rush’ tickets online every Friday at 1 pm for the following week’s performances. They also release low price £20.00 restricted view tickets for each show, however, you’ll need to be quick off the mark when new performances are announced, as these tend to sell out fast.

Southwark Playhouse offers a ‘pay-as-you-go subscription’ service, £60.00 for a balance of five tickets that can be redeemed anytime you like at any of their shows. You can even use one of your tickets to bring a friend along to the performance. That works out at a very affordable £12.00 per ticket.

Almeida sells a number of last-minute tickets at knock-down prices each week as part of its ‘Almeida Rush’ offer. Allocated seats for performances the following week are made available every Tuesday at 1 pm.

The Royal Court Theatre lists cheap £12.00 ‘Monday Tickets’ at 9 AM on their website each week, for performances later that day.

The Young Vic runs a £10.00 ‘Lucky Dip Tickets’ scheme for selected performances. Book via the website, and turn up before the show to find out if you’ll be sitting or standing.

Battersea Arts Centre puts on ‘Pay What You Can’ test runs of new plays in development. Known as ‘Scratch’, these performances allow theatre companies to get feedback on their work. So, you’ll be contributing to the final iteration of the show as well as grabbing a cheap theatre seat.

The Globe offers 700 £5.00 ‘Yard’ tickets for every performance. These can be purchased at the box office, online or over the phone. The only catch is you’ll be standing with no roof over your head for the duration of the play.

Arcola reserves a selection of ‘Pay What You Can’ tickets each Tuesday evening. These are tickets for finished productions, with the idea being that money should never be a barrier to art–we can get behind that! All you need to do is turn up after 6 pm on the evening of the show to join the queue and make whatever monetary contribution you feel comfortable with.

Tickets for a number of smash hits, such as Hamilton and The Book of Mormon can be purchased cheaply if you enter a ticket lottery.

The Hamilton Lottery can be accessed online or via an app. More details here..

The Book of Mormon Lottery takes places at the Price of Wales theatre two-and-a-half hours before the start of each show. More details here.

There are a number of organisations that help to keep theatre venues full each night by offering ‘free’ tickets. They’re not completely free, as you’ll have to pay an admin charge of around £2.50–£5.00. But they do provide an incredibly cheap way of snagging a seat at a London theatre show.

Longstanding members often have access to the most popular shows, so it pays to use the service often. If a scheme is not currently accepting new members, be sure to check again in the future, as they may well be on the lookout for new theatregoers at a later date.

Central Tickets offers a variety of cheap theatre tickets for £4.00 each.

ShowFilmFirst has an admin fee of £2.50 per ticket and also offers cinema screenings.

Cheap theatre tickets for under 30s and under 26s

The Young Vic releases a number of £10.00 tickets for under 26s and full-time students for every production. Check the listings when a new run of performances is announced.

The Royal Shakespeare Company releases 20 £5.00 tickets for every performance. They’re available to those aged 16-25, and can be booked at the Barbican Box Office or over the phone on the day of the performance at 01789 331111.

Hampstead Theatre offers £10.00 tickets for under 30s for every performance. Tickets can be booked in advance online, over the phone or in person at the Box Office.

If the show you’d like to see isn’t available under any of the above schemes, here are a few pieces of general advice to help you get cheap theatre tickets in London.

Check a variety of online prices. Start with the official site, and then compare the tickets from services like From the Box Office, See Tickets and Encore Tickets.

Another decent option is TKTS in Leicester Square. ‘The Official London Theatre Ticket Booth’ sells same-day tickets with big reductions–sometimes at less than half price. You can rest assured your tickets are legit, as TKTS is operated by the ‘Society of London Theatre’ and is the only official ticket booth in the city.

Seats in the gods will be cheaper, but always use a seating website like TheatreMonkey to check the reviews for your specific seat number.

Midweek shows and matinees also tend to be cheaper than the prime-time performances over the weekend.

A final word of caution, there are often touts selling cut-price theatre tickets in and around Leicester Square. While these tickets may well be above board, it is difficult to be sure. And for this reason, we recommend sticking to the official outlets.

Sticking to ticket sellers displaying the Society of Ticket Agents and Retailers (STAR) logo is a good rule of thumb. STAR members are regulated and approved by the government to resolve any problems that might occur later down the line.