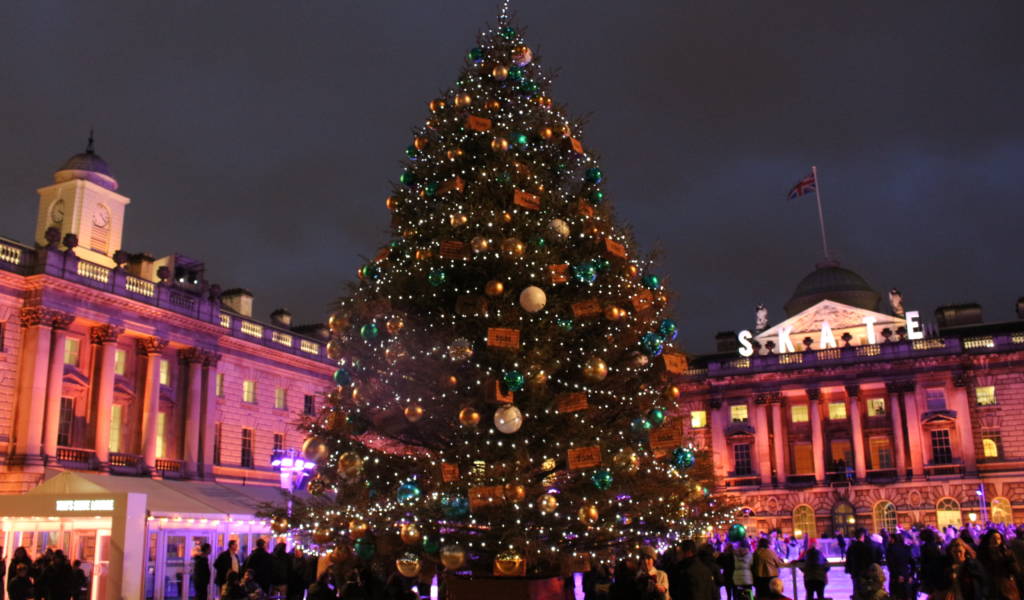 London Skating: Outdoor Ice Rinks for All the Christmas Feels

Christmas means London’s outdoor skating rinks are back up and running, so whether you’re an expert skater or spend most of the time gripping the sides for dear life, it’s a fun way to spend an hour.

There’s one problem with this great idea though: it can be hella expensive. But if you’re willing to go outside of popular times you can skate for less than half the price that some less-savvy Londoners will cough up. Here, then, is our guide to London skating on the cheap.

Look for off-peak slots and early-bird options, often found on morning sessions on weekdays. While the fixed price spots (like Tower Bridge) may not seem great, they can work out cheaper on ‘peak’ times that places with varied prices, so keep that in mind if you want to skate closer to Christmas. Of course students and children generally get in cheaper and family tickets are available to help save too. Also, as annoying as booking fees are, with such a popular passtime it’s better to book ahead than risk your chosen session being sold out (yes, even at 9am).

The grand dame of London’s outdoor skating rinks, amid the Neoclassical splendour of Somerset House’s courtyard, this is also one of the most popular. Somerset House knows this, and the website helpfully lists the most popular dates. Off peak dates are from the 19th – 23rd Nov, the 26th – 30th Nov and the 7th – 11th January.

Prices start at £11.00 for adults and £8.50 for children and concessions (including those on PIP and Univrsal Credit) and there are wheelchair sessions available too. You can There are Skate Lates again this year which combine acts like the Dalston Superstore takeover, Josey Rebelle and House Gospel Choir Soundsystem with evening skating. To snag the cheaper prices go earlier in the day if you can and opt for off-peak dates.

Go skating and then see the dinosaurs! The NHM’s skating rink has cheaper slots in the morning but also late at night. The peak times are from December 8th – January 6th when all days fall under the £15.95 – £17.05 pricing options. During off-peak times, however, weekday slots cost between £12.65 – £15.95, although weekends remain at the higher prices.

There are bonus items to add like afternoon tea or chapagne if youre looking for a treat and some late-night sessions will feature live music and DJs.

The Canary Wharf skating rink stays open until 24 February 2018, so it’s worth bearing in mind long after festive shenanigans are over. The first session of each day—between 9am and 12.15pm, depending on the date—costs £9.95 instead of the usual £16.95. This applies on weekends too, making it one of the cheapest ways to get your skating fix outside the working week, even if it does mean getting to the Docklands for 9am.

The Christmas extravaganza is back in Hyde Park, with its gigantic wheel, circus and entertainment shows, places to eat and drink and, of course, a skating rink. The bandstand provides live music and the chance to skate is pretty consistent—running from 10am – 10pm with sessions lasting 50 minutes. Skate rental is included and it’s suggested your arrive 20 minutes early to get your skates and be ready to go.

There are booking fees of between £3-£10 depending on your total amount. Tickets will be available from the box office but may sell out.

The question now is: when is off peak? The answer is: not simple. Unfortunately this information is only available when booking tickets and varies wildly, but generally weekends are entirely peak (bar the odd early session), and off-peak tickets can only be found on weekday mornings. Try the first 1-5 sessions of weekdays, up until Dec 14th. After that, some morning sessions are standard while afternoon are peak, including Christmas Eve, Boxing Day, and New Year’s Eve, which is pretty good. There is no drop back down to off-peak after Christmas or New Years, but there are more Standard prices to be had than Peak on balance.

It’s not the cheapest rink around, but skating at the Tower of London has the added advantage of being the same price all the time—none of this peak/off-peak malarkey. It’s £14.50 for adults all the time, whether you want to skate at 8pm on Christmas Eve or 11am on 28 November. Even adding a mini bottle of prosecco only takes the cost up to £22. That’s really not bad. And you’re right in front of the Tower of London which offers an impressive backdrop for your mean skating skills.

Hampton Court skating rink works on the same principles as the Tower of London (not surprising as it’s run by the same company). One price, whenever you go. The only difference is it’s ever-so-slightly cheaper: £14 for whenever you want to take to the ice. Does it get more festive than skating at a Tudor palace? Possibly not.

This isn’t one of the major rinks and as such it’s a fair bit smaller, but it is the only rooftop ice rink in Europe, so it’s an unusual one. It’s attached to a Skylight’s rooftop bar in Tobacco Dock (imagine a colder version of above, with more coats), which has replaced its summer croquet and petanque with a skating rink as a fun alternative if you’re bored of drinking mulled cider and eating fondue (as if you can ever get bored of eating fondue). Tickets cost £10, can only be bought on the day, and get you 45 minutes of skating. Open until mid January.