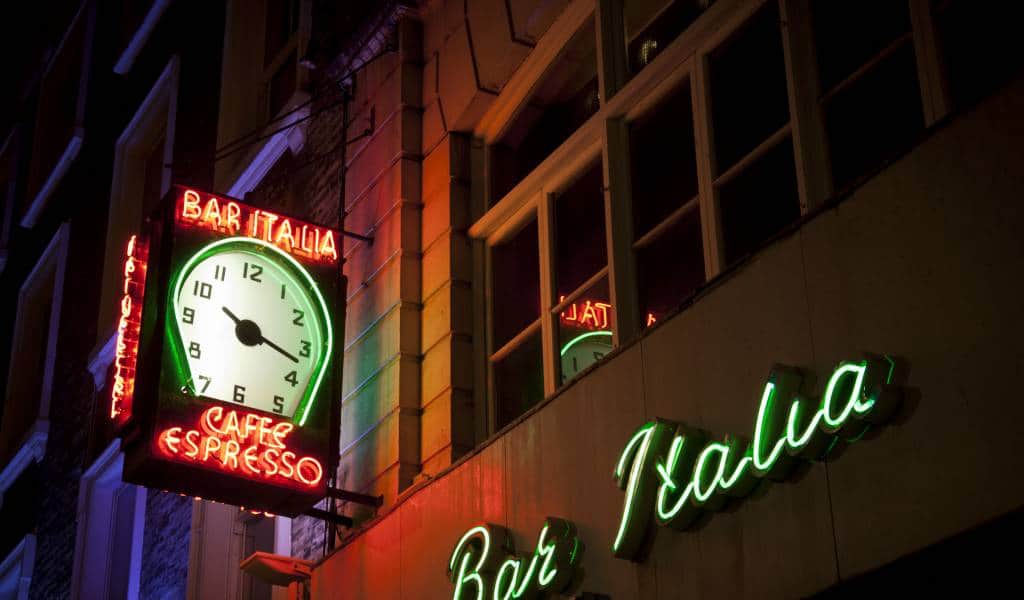 When it comes to café culture, London’s opening hours can seem a little restrictive. Many cafés shut around 6 pm. But not all of them! There are plenty of late night cafes in London if you know where to look. Luckily for you, we do. So if you’re looking for a post-work cuppa, somewhere to meet a deadline, or a cosy corner to read a book, read on.

Söderberg is a mini chain of Swedish bakeries and cafés that started in Edinburgh. It’s a newbie to London, the Berwick street branch in Soho only opened in January 2019. The café stays open until 9 pm most days. On Monday it shuts earlier at 7:30 pm, while on Sundays it shuts at 6:30 pm.

Mid-century modern furniture, Scandi minimalism, good coffee, delicious baked goods, and friendly staff make this a popular spot from breakfast until dinner. Upstairs is best if you’re looking for somewhere to work on a laptop or meet with a larger group. Downstairs feels much more like a living room, with comfy chairs, sofas and a couple of cosy booths too.

As well as fancy, strong Swedish coffee, you can also get wine, craft beer and cocktails. The evening menu consists of lots of small Smörrebröd sharing plates. Think Swedish meatballs (veggie options are available) and plenty of sourdough and rye open sandwiches. Pop in on Wednesdays for Lillördag (little Saturday) and celebrate the mid-week the Swedish way, with live music and records.

For a slice and a sip of old Soho, head to Bar Italia. It’s London’s longest-running coffee shop, which has been a local favourite since 1949. Serving night owls and early birds alike, it’s open from 7 am until 5 am every day except Sunday.

This is not exactly somewhere to go for a relaxed evening though, it’s all about people watching and bustle. The atmosphere at Bar Italia was made more famous by Pulp in the 90s, with Jarvis Cocker singing “Two sugars would be great, cause I’m fading fast and it’s nearly dawn”.

That song sums the place up pretty well. Things can get pretty rowdy, particularly if there’s Italian football on. You can get coffee and snacks at pretty much any hour of the day or night. Alternatively, as it’s open later than most bars as well as cafés. Pop in for something stronger if Negonis or Aperol Spritzes are your thing.

Notes is a small, but growing chain of coffee shops and bars that roasts its own coffee. The original Notes is a cosy spot on St Martin’s Lane by Trafalgar Square. It’s a decent sized, airy spot that’s perfect for a pre-Theatre cuppa or glass of wine. Food is mainly small plates, sharing boards (including veggie or vegan) and charcuterie. The Trafalgar Square branch is open until 9 pm Mondays-Wednesdays and then until 10 pm apart from Sundays when it shuts at 6 pm.

Since opening in 2011, Notes has expanded to King’s Cross, which has two levels (but expect to queue or pre-book after 5 pm even on weekdays if you want a seat). These late night cafes in London have also popped up in Victoria, Canary Wharf, Bond Street and Bank.

Scooter Caffè is a much-loved independent café-bar at the far end of Lower Marsh, just behind Waterloo station. Upstairs is small, with just a few small tables. But downstairs is a dimly lit, bohemian basement, which is better if you’re there with a group. Just watch your step on the old, metal spiral stairs. Especially if you’re carrying a piping hot coffee.

The menu is more about drinks than food. You can get coffee and tea but also beer, wine, and cocktails. Food-wise, it’s mostly snacks like small cakes. But there are plenty of decent cheap places to eat along Lower Marsh if you’re in need of something more substantial. Pop in for a cuppa or a nightcap..

Greenberry Café: charm on a plate

Escape the chaos of Camden and head down Primrose Hill High Street to one of the most charming late night cafes in London. Go after 5 pm if you want to avoid tripping over buggies. Although it’s worth trying to grab an afternoon table for their carrot cake alone.

But Greenberry doesn’t just serve up coffee, tea, and cake. It’s a bistro-style café, specialising in simple meals and Mediterranean flavours. It’s as stylish as all the ultra-bougie eateries in the area, but it’s not too pricey. Mains cost between £12.00–£18.00, which is more-or-less gastropub prices.

The airy interior, warm lighting, and gentle buzz make it an inviting spot to bring a mate or date for dinner too. There are plenty of small bites and snacks too. And a drinks menu
that ranges from Clipson & Son’s coffee and soft drinks, to beer, wine and even a decent selection of single malts. Greenberry shuts at 3 pm on Sundays and Mondays but is open until 10 pm during the rest of the week.

Over in east London, just off Brick Lane Canvas is all about plant-based refreshments and community. The menu is 100 percent vegan, and it’s also a social enterprise that puts on events. Canvas is open until 8 pm most days. It stays open until 10 pm on Fridays, but the kitchen shuts early, with last orders at 5:45 pm. Looking for more community cafes in London? Look no further.

The community spirit extends outside of the Canvas walls too. You can buy a meal or hot drink for someone that might need it in the local area via the Pay It Forward scheme. Pop in for an early dinner or an evening cuppa, stay for the regular free and cheap events including improv sessions, stand up comedy and workshops.

The very literal name is the least interesting thing about the Bridge Café. Yes, it’s under a bridge. But it’s no ordinary café. This Hoxton hangout is a delightfully chaotic mish-mash of kitschy curiosity shop, Victorian parlour, and speakeasy joint. It’s like being plonked into the middle of a Jim Jarmusch movie. Subtlety is not on the menu here.

You might need a pair of shades to adjust to the neon levels on the ground floor. But it’s all good. Just take the edge off with a reviving cup of Turkish coffee and some sugary Baklava. There’s also a bar if you fancy a boozy beverage. It’s cash only though, which is a bit of a pain. Bar prices aren’t exactly cheap either, but it’s worth visiting just to explore the place in the evening. Check our our other cosy hangouts and hideaways while you’re in the area.

Want to see how they do things in over in Tokyo? Our friends at Tokyo wrote this guide to Japan’s “Kissaten“—Showa era coffee shops that have remained much the same since the 60s and 70s.