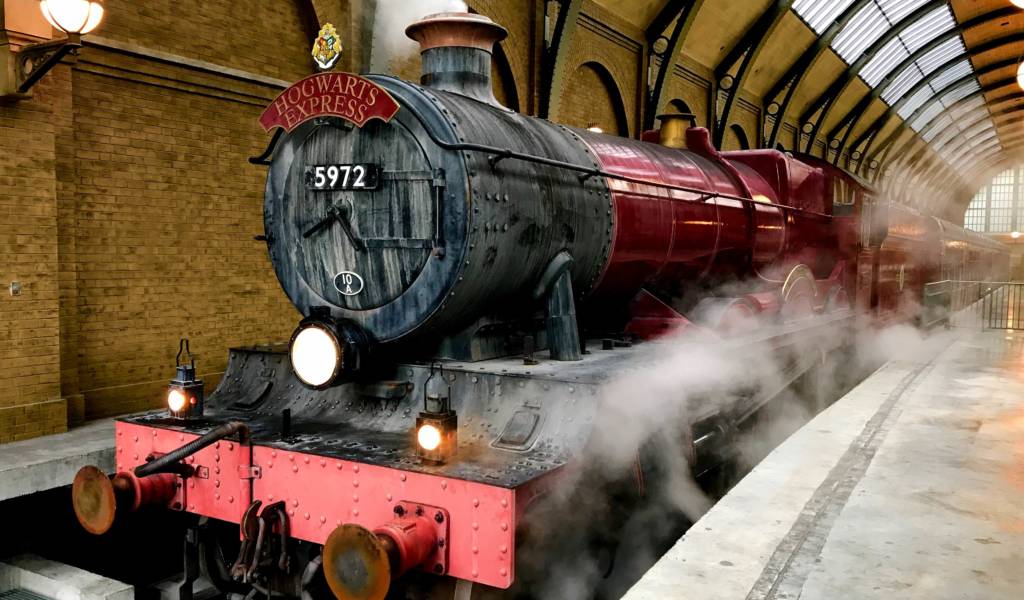 Film lovers don’t have to go on expensive studio tours to wander through some of their favourite Harry Potter London locations. That’s especially true for Potter fans, where a trip to Warner Brothers Studios in Watford will set you back £45.00 (going up to £47.00 in 2020).

But happily, JK Rowling based much of her world on real London locations. So there are plenty of self-guided walks you can do to visit Harry Potter locations and related places if you know where to look. We’ll show you where to go for your Potter needs, and help you get there faster than a trip on the Hogwarts Express. Which won’t accept your Oyster card anyway. If you’re looking for the additional trivia of a guided film location walk, you can book a spot here. Don’t fancy walking? There’s also a guided bus-tour to whisk you from location to location.

Find the entrance to The Leaky Cauldron (aka Leadenhall Market)

This beautiful, historic covered market was the stand-in for Diagon Alley in the first film, Harry Potter and the Philosopher’s Stone. Leadenhall Market is one of London’s covered markets, with the original market dating back to the 14th Century. That said, much of the market was ruined by the Great Fire of 1666. So most of the architecture you can see now is from the Victorian redevelopment in the 1800s.

The ornate, glass roof through the hues of deep red and blue feel pretty at home in the Potter universe. But the best connection is a little tucked away. Head to 42 Bull’s Head Passage and you’ll be greeted by a blue door. You might remember this as the entrance to The Leaky Cauldron, where Haggrid walked with a very young Harry to access the wonders of Diagon Alley.

Getting there: Monument, Bank, and Liverpool Street station are all about a 5 minute walk.

Death Eaters wreak havoc across London in Harry Potter and the Half-Blood Prince, the 8th and final instalment of the franchise. They descend and terrorise Muggles across the city, swooping past Nelson’s Column, St Martin’s-in-the-Fields before destroying Millenium Bridge.

In the film, the bridge is destroyed in a mass of twisted metal and smoke. Walk over it on a cloudy day to recreate those moody skies and picture the scenes from a sturdy place. Famously, the bridge initially swayed heavily on opening—apparently from the momentum of everyone subconsciously walking in sync. After a few years of engineering works, the council has fixed that issue. Now you walk the bridge securely for bonus views of other London landmarks including St Paul’s (which also contains a stairwell that features in The Prisoner of Azkhaban) and The Tate Modern.

Getting there: The closest station is Blackfriars (4 minute walk). Also, St Paul’s, Cannon Street and Southwark are each about 8-9 minutes on foot. 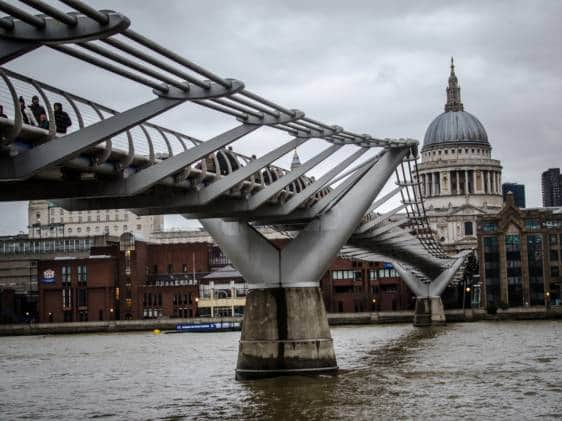 On any given day, head to the back of King’s Cross station to join fans dressed in their Hogwarts house colours. You can get your picture taken at the famous platform 9 ¾ sign. There’s even a luggage trolley phasing through the wall that fledgling wizards went through to get whisked off to wizarding school.

Instead of teleporting through the wall, curious muggles can head through the door into the Harry Potter shop. It’s designed to look like Ollivander’s Wand Shop. When you’re done sightseeing, be sure to check out our list of cheap and free things to do in King’s Cross

Getting there: Get off at King’s Cross St Pancras Underground, and head into the mainline station.

The opulent marble interior of Gringotts is actually Australia House, home to the Australian High Commission in Aldwych. The Grade II listed building isn’t generally open to the public (unless you’re applying for an Australian passport). That said, you can take a look through the glass panes on the entrance doors to see the chandeliers and banking hall.

However, if you plan ahead, you can book tickets to visit the building as part of Open House London each September. It’s worth a wander down Aldwych, to look at the Gothic spires of The Royal Courts of Justice. It isn’t featured in the films, but there’s a definite Hogwarts vibe!

Getting there: Temple station is about a 5 minute walk. Holborn is roughly an 11 minute walk.

Get a Muggle’s eye-view of the Thames (City Hall)

At the start of Harry Potter and the Half Blood Prince, Muggles gather around a table inside City Hall, the HQ of the Greater London Authority and the Mayor of London’s office. The sky darkens, and the Muggles get up to look out of the windows to the menacing face of a death eater.

The building itself, also known as the beehive due to its shape, is open to the public at certain times, and free too. You’ll have to go through security, which includes bag-scanning, so factor in the extra time when you go.

Take the lift or ramp that winds through the centre of the building to get to the viewing gallery and look over the Thames. If you head up to the second floor, you can look down at The Chamber (of not-so-secrets). If you want, you can catch assembly meetings and debates while you’re there.

Getting there: London Bridge (Rail or Underground) or Tower Bridge are both 5-10 minutes’ walk.

The Leaky Cauldron might be hiding in Leadenhall Market, but the inspiration for Diagon Alley can be found over in the West End in Cecil Court. Meanwhile, nearby Goodwin’s Court is the real-life ‘Knockturn Alley’. It’s the sinister backstreet filled with shops peddling wares related to the dark arts, where Haggrid warns Harry against “skulkin” down. The reality (as far as we muggles know) is much more pleasant.

Avoid the noise of the Leicester Square/Charing Cross Road areas for some escapism. It’s these two two quaint side-streets that inspired JK Rowling as she strolled down them, imagining her world of magic. It’s a haven for book lovers in general, with some eccentric and esoteric shops, like Watkins Books, which sells books on subjects including witchcraft and magic. It also does in-store Tarot readings and sells talismans. Goodwin’s Court is even older and more atmospheric, complete with bow-windows and original gas lamps. It’s easy to see how they inspired the locations for wizards running errands.

Getting there: Cecil Court is between Charing Cross Road and St Martin’s Lane, while Goodwin’s Court is off St Martin’s Lane. Both are a few minutes’ walk from Leicester Square and Covent Garden

All the featured locations are in central London, and pretty easy to get to, but if you fancy hanging out with other Harry Potter fans, and letting someone else lead the way, then hop on a free tour.

Join tours by Strawberry Tours (daily) Free tours By Foot (MondaysWednesdays,Thursdays and Saturdays) and Wonders of London (weekly, dates vary). Although there is no charge for the tours, they’re what’s known as ‘pay what you feel’. So consider giving a small donation of a fiver or so to your tour guide at the end.

If you want to see some of the creative magic that goes in to the films, head on over to House of MinaLima on Greek Street, Soho. The colourful-fronted place is a small, free exhibition of art and graphics from the Harry Potter and Fantastic Beasts films. What’s more, it’s run by Harry Potter and Fantastic Beasts designers Miraphora Mina and Eduardo Lima.

Get up close to prints and props as featured in the films which are on loan from Warner Brothers. There are free gallery tours every Monday and Tuesday too, no need to book in advance. Keep an eye on House of MinaLima’s social media channels to find out when Mina and Eduardo will be dropping by the shop to answer your questions. Our cheapo guide to Soho has plenty of other great things to do while you’re in the area.

Getting there: Oxford Circus and Tottenham Court Road are a few minutes’ walk.

Check out our full guide on free London walking tours.